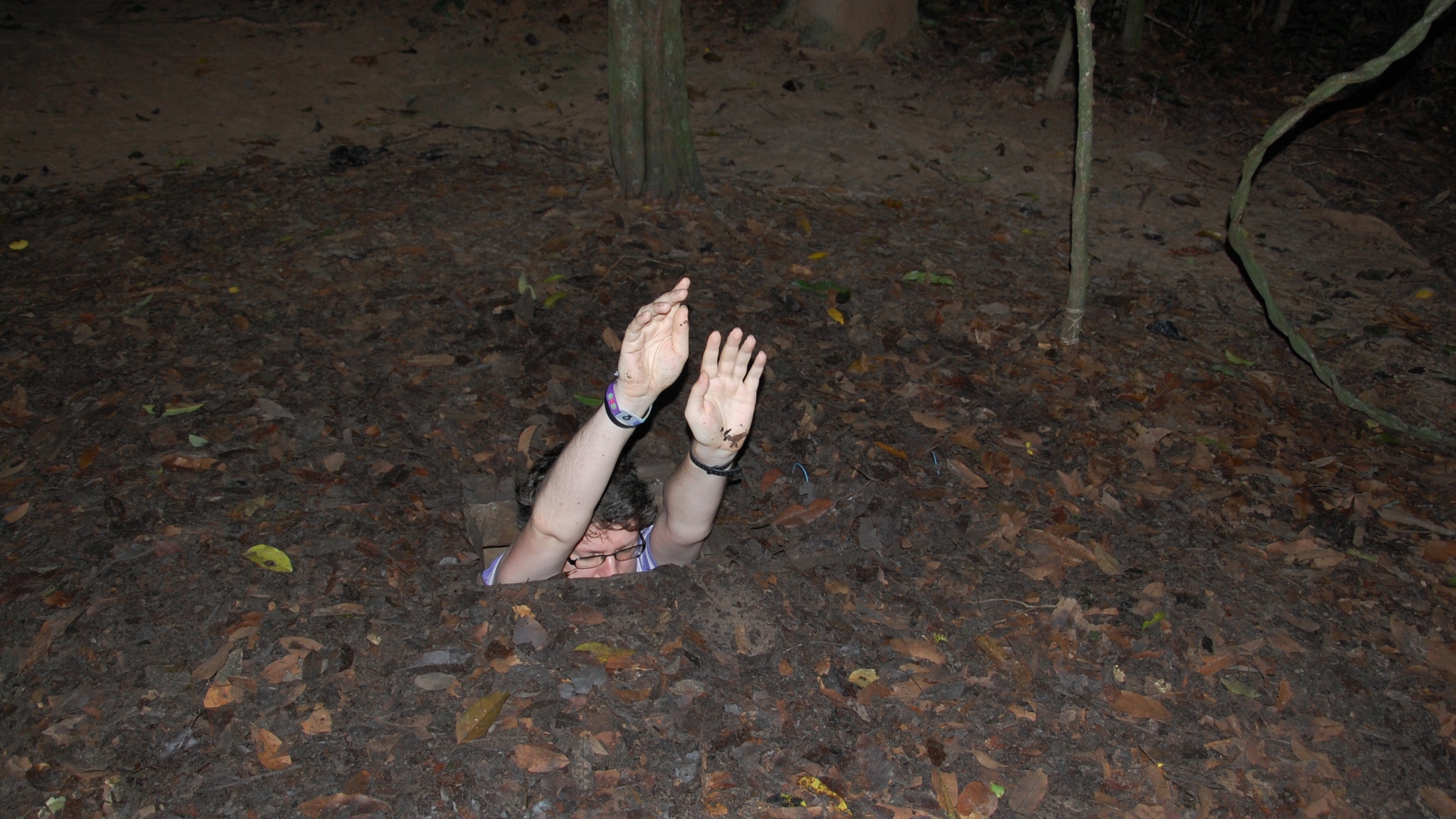 My husband Kristof disappears in one of the tunnels the Viet Cong used during the American War/Vietnam War.

‘Are you sure you want to go in there?’, I ask Kristof. I’m worried he will get stuck as the entrance of the tunnel in Cu Chi is so narrow. It seems to me only a child can enter. Judging distances was never one of my talents.

The ranger who joined us and our guide in the jungle, smiles and goes first to show us it’s not that bad.  It’s a hot and sweaty day. In the distance I can hear thunder. Another afternoon storm seems to be approaching. The jungle gets a bit gloomy. I can see  why American soldiers were so afraid here. 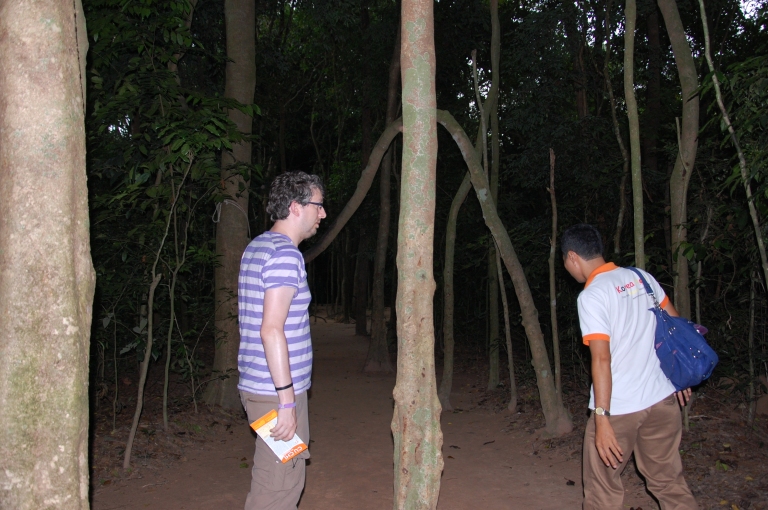 What I can’t see, is how the Viet Cong soldiers managed to live here during the Vietnam war. The tunnels were also used to get from one place to another. Underground. Sometimes they walked more than 100 km according to our guide.

I guess they didn’t suffer from claustrophobia or bad backs and knees. The tunnels are 0,5 tot 1 meter wide. Even with my 1m53, I can’t stand up.

After two underground sessions, (not even 20 meter), my calves are screaming: what are you doing to us?! So: respect for all those who travelled several 100 miles through the tunnels.

The tunnels were used for many things: as a hide-out during combat, as communication and supply route, as a hospital, as a living space for North Vietnamese fighters. Life underground was dangerous. A lot of soldiers didn’t die during combat, but from poisonous insects, malaria and the bad living conditions.

This is a lay-out of a tunnel. There are spaces for dining, living, meetings, fighting …

This is the meeting room where Kristof ended up after sliding in. 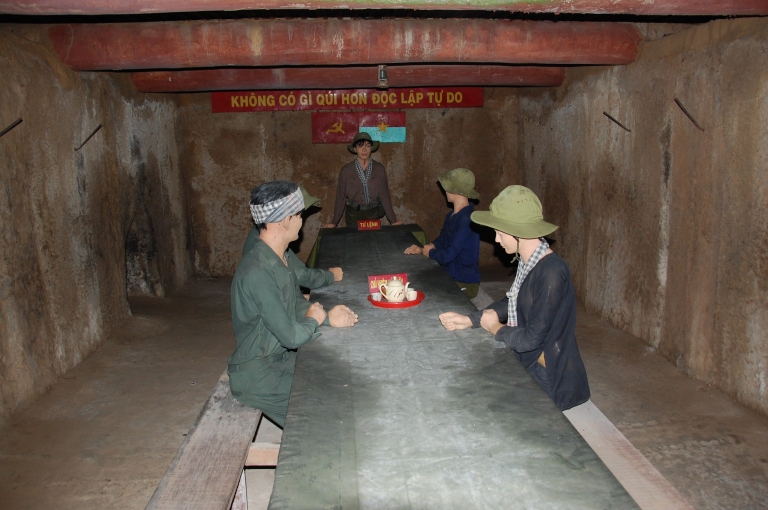 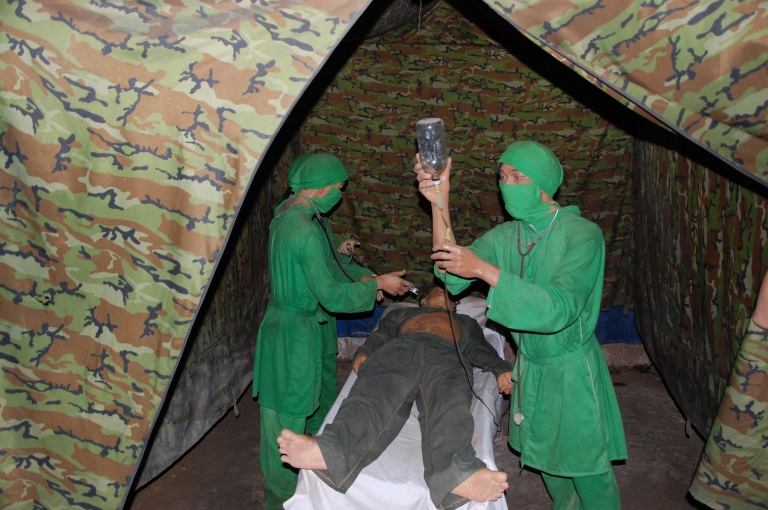 How did they survive underground? There was a ventilation system, the vents looking like an anthill.

The Viet Cong had several types of traps which scared the Americans. On the picture you don’t see the spikes in the trap.

Our guide took us to the Ben Duoc part of the tunnels, which is less touristy and crowded than Ben Dinh (which is closer to Ho Chi Minh). Moreover, the tunnels are unaltered for tourists. A ranger joined us as our guide told us the jungle still has secrets for him, even after many years as a tour guide. There were indeed not too many other people there.

How to get there? Check out this blogpost by Julie.

Apparently, not all Viet Cong liked using the tunnels. In an interview with  Evan V. Symon, Nguyen Hoa Giai, a veteran, says:

‘Thanks to Hollywood, you probably picture the VC as constantly popping out of holes in the ground like deadly gophers. My uncle and I didn’t trust the tunnel systems many of the other Viet ong used. They were prone to collapse, and if that happened over a barracks or a mess hall it was likely to kill more people than an air raid.’

‘So we did most of our moving around outside, under the questionable cover of grass mats. But sometimes we’d have to go really far south, or there’d be exceptionally clear skies and we’d decide that the tunnel sounded like marginally more fun than a bomb. The tunnels were essential for a lot of the VC, though, especially around Saigon.’

A quick history lesson about the war

From 1955 to 1975, there was a war between North and South Vietnam. The North (with Ho Chi Minh as their leader) and the Viet Cong in the South wanted to oppress anti-communist forces in the South with the aid of  the Soviet Union, China …

The USA supported dictator Ngô Đình Diệm in the South, because they hoped South-Vietnam would become a kapitalist country. It all escalated in a terrible war.

1 to 3 million Vietnamese died. A few 100 000 in Cambodia and Laos were killed as well. Those countries got bombed because of the Ho Chi Minh trails, a logistical system from North to South Vietnam that provided the South with manpower and materiel.

The war still has consequences today. More than 200 000 veterans suffer from post-traumatic stress disorder. And Agent Orange causes genetic anomalies: even today children are born with handicaps that causes genetic changes  even in the third generation after the war.

Khan Academy explains it all really well in this movie.

A Vietnamese veteran tells his story

And here are 8 things Vietnam War movies leave out. It’s an interview with Nguyen Hoa Giai, a veteran, who tells about the war from the Vietnamese point of view.

Some quotes that struck me:

Do you want to discover more about Vietnam? Read what we did.